Note: This is the Revolt3000 pitch from Q1 of 2015 preserved in its entirety and covers the evolution of the ReVolt3000 that was presented in the Kickstarter campaign.

$ave a battery, save the world!

Automotive Battery rejuvenation and battery life extension is a possibility I’ve known about for decades. It’s not magic, gee-wiz science or even unique. But it is hard to find a unit capable of performing like thousand dollar commercial units at a consumer price. So, I decided I would make one with a target retail price of $250.

ReVolt3000 is specifically intended to be a small business or consumer level device to revive dead batteries, and to extend the life of working  batteries many fold.  These intended batteries are expensive lead-acid type rechargeable batteries typically used in larger applications from scooters to solar arrays but focusing on usual car, truck, boat, RV and aircraft like batteries. However, the ReVolt3000 also has the ability to revive and extend the life of other types of batteries as well such as Gel-cell, NiCad, NiMH and others.

ReVolt3000 started as my mild interest in battery recovery (rejuvenation) and service longevity. Familiar throughout most of my life with battery chargers, charging techniques and crude “pulsers”, I knew that most lead-acid types of car batteries as well as others (gel-cell Ni-Cad, NiMH, etc.) were not seeing their full potential because of the charging options or practices.

Having a few too many automobiles, I started to note the rise in price of replacement batteries and began to explore and experiment with rejuvenation/extension methods.

I focused on automotive type batteries (car, truck, RV, boat, motorcycle) specifically. After exhausting my personal supply, I began running ads to buy dead batteries from people, I soon had pallets of dead batteries in my backyard – some had been left sitting dead for 10 years or more in peoples fields, yards or garages.

As a baseline, I first gauged the effectiveness of the old Diode/Light bulb method. 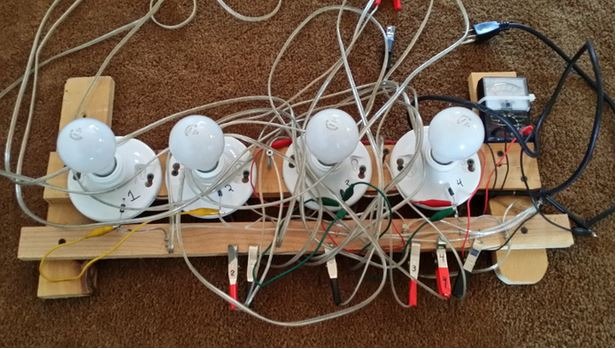 This provided some measurable results, and some baseline expectations, but certainly was not at the level of performance I wanted nor was it usable as a product due to many safety issues.Now with some numbers of what the worst solution could offer, (about a 20% success rate), I knew it was worthwhile and that I could do much better.  I went through numerous methods from other designs on breadboards until I finally arrived at my own effective drive system. 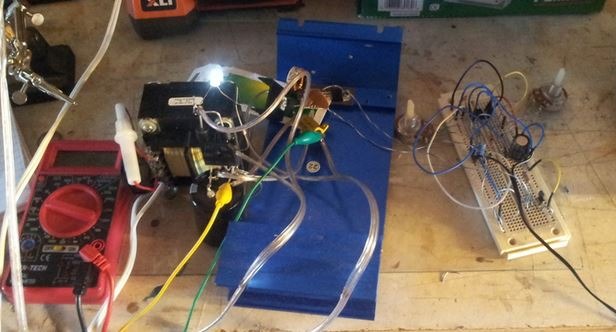 After cycling through hundreds and hundreds of dead batteries, I was able to optimize my method and best practices.  At this level of development, I found that the success rate of recovery with my newest design and method was high enough to actually make money reselling these batteries for people in need of replacement automotive batteries. So, I cut my first circuit board of this design and made a prototype to put to work. 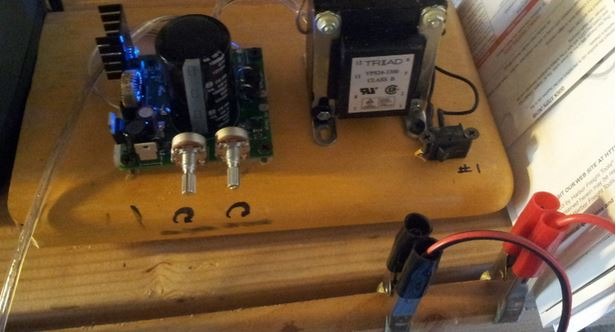 Soon, the battery rejuvenation business became too much as neighbors became worried about the number of people visiting my home. Yes, I could have taken this into some sort of traditional business. But that was neither my desire nor my goal. My goal was to build and manufacture this device as well as even more advanced units in the future.So to that end I have persevered, creating many revisions and prototypes. 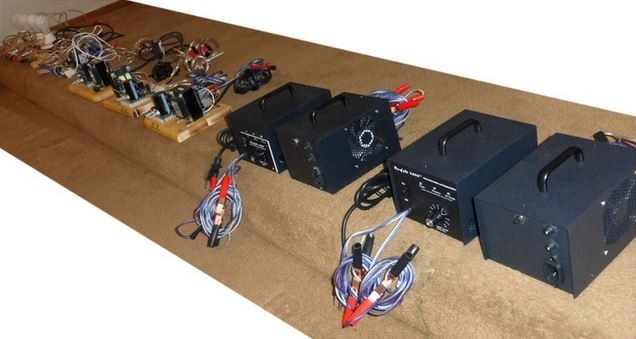 A long line of trials and improvements.

I wanted something very utilitarian, durable and serious. I’ve always appreciated the seriousness of a black steel box. I wanted all my safety components to be re-settable and externally accessible. I wanted maximum cooling and very simple operating panel. And thus, in November of 2013 the first ReVolt3000 unit was built and sold to an aircraft repair business which continues to use the unit today.Finally I produced the first pilot production units and began tracking their performance. 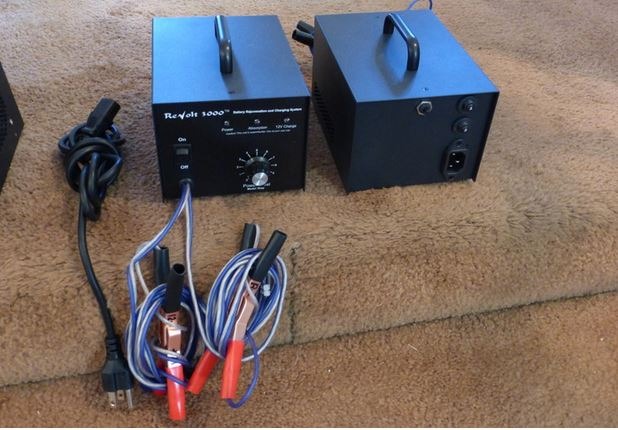 How the ReVolt3000 can help others around the world.When you look at the number of these batteries in service throughout the world, and in poorer countries especially, you can see that people and the environment would benefit greatly from the lower cost and reduced waste created by extending the life of these batteries by 4 or more times their rated lives. Thus lower cost of ownership, and a slower stream of these batteries entering landfills by extending their service lives benefits both the owners and the environment.In many make-shift solar, wind or other power storage applications found in poorer countries or off-grid rural situations, a battery healthcare system like ReVolt3000 can quickly save thousands of dollars. You see, batteries have “cells”.  And while a battery maybe useless once one of these cells is dead, it doesn’t have to be.  This technology can still revive parts of cells which can still be utilized in these applications even if the entire battery cannot be revived because of internal damage to other cells.

Because these batteries are often made of multiple cells in series, if one cell fails, it renders the entire battery useless. “Cell-spiking” is where an individual cell that has failed and is purposely shorted out by driving a “spike” into it to make the battery useful again. For example a 12 volt battery with a bad cell is useless. But short out the bad cell and now you have a good battery again, except it is now 10 volts. None-the-less, in many situations like rural and poor countries where space is not a premium, these types of batteries can still be combined to make up the proper operating voltages for their needs and continue to operate for years. 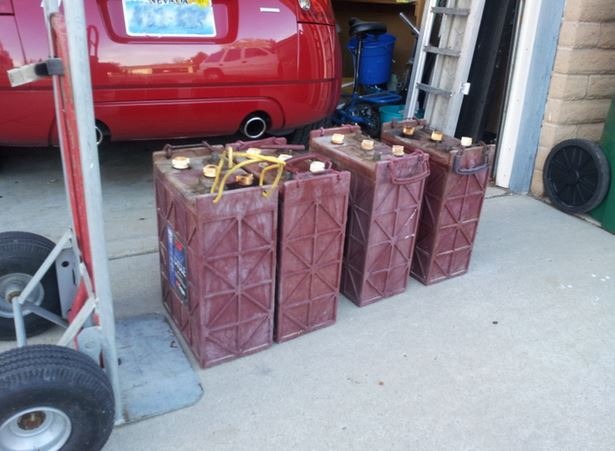 Some solar farm batteries for testing with the ReVolt3000.

How does it work?

The ReVolt3000 is intended to be used to improve the performance of, or rejuvenate dead, 12 volt lead acid automotive batteries and many others. These others include, NiCad, NiMH and Gel-types. Many similar devices use “Pulsing” to accomplish this. This is associated with reducing the build up of Lead Sulfate which accumulates and covers the plates when left discharged, thus reducing their effectiveness and, if left unaddressed can eventually grow render the battery useless.

The ReVolt3000 uses a proprietary bi-phase pulse method designed not only to de-sulfate the battery but to clear small, low resistance zones or short circuits which can occur between cell plates that are in a contaminated baths.The ReVolt3000 cannot correct bad chemistry, dried cells or damaged plates. Therefore, it works best on batteries which have not fallen into these conditions which usually occur from long periods of no attention (like years of sitting on the ground exposed to the elements in a backyard). Nonetheless, trials of the ReVolt3000 on many of these “junk” batteries exposed to those extremes has still shown a success of recovery to typically 80% of the battery’s original capacity (about equivalent to a battery with about 2 years of use). 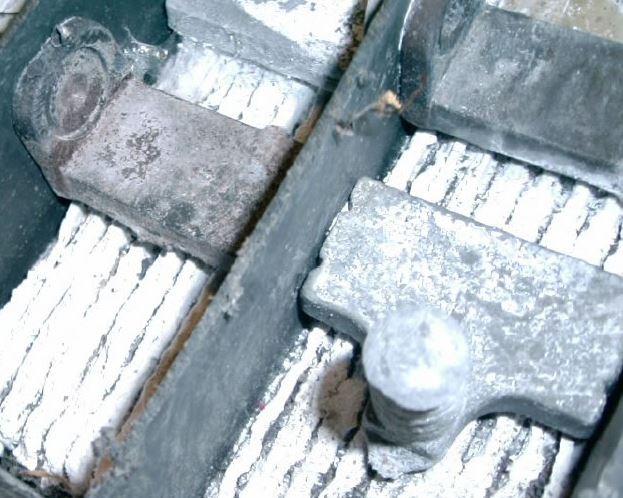 The ReVolt3000 has two primary features: The revitalizer and the no-fault charger. Both can be used simultaneously on different batteries. The revitalizer can de-sulfate, clear small or low resistance zones and charge the battery all at once. The no-fault charger will simply recharge a weak battery, but often will do so when modern chargers cannot. 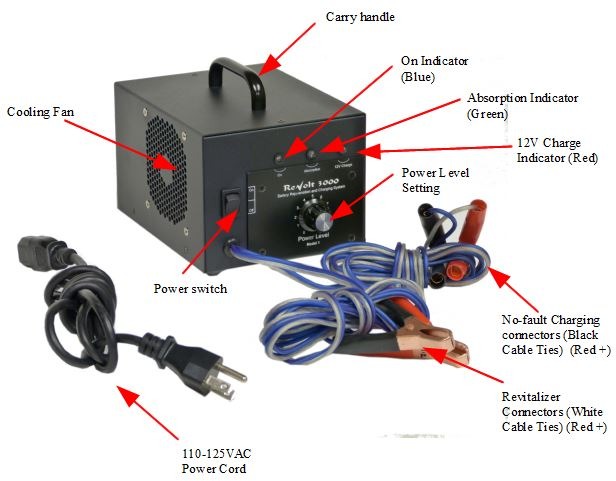 To get the most benefit from ReVolt3000, it is recommended that you give periodic treatments to your working batteries once or twice a year (4-8 hours of treatment). This allows for the maximum benefit and life extension by reversing sulfate build-up before it has an opportunity to do irreversible damage to the performance and life of your battery.

In this video, I demonstrate the ReVolt3000 recovering a junk battery. As mentioned earlier, I bought hundreds of junk batteries from people for testing various rejuvenation strategies. This particular battery was one of the last ones from the last batch I had purchased. It had been left sitting for a few years but that was all I could remember from the seller.

From my experience with this assortment of batteries, it had a 50/50 chance of recovering. It was recovered, although not the strongest, it did climb into the low side of the “good” range under load.

The heart of the ReVolt3000 is a durable linear power supply, powerful inductors and capacitors along with powerful switching to create and control a unique bi-phase energy that de-sulfates and busts low-resistance zones in the battery. Heat is quickly removed by a powerful long-life fan. Superior circuit protection is provided by 3 externally resettable circuit breakers. 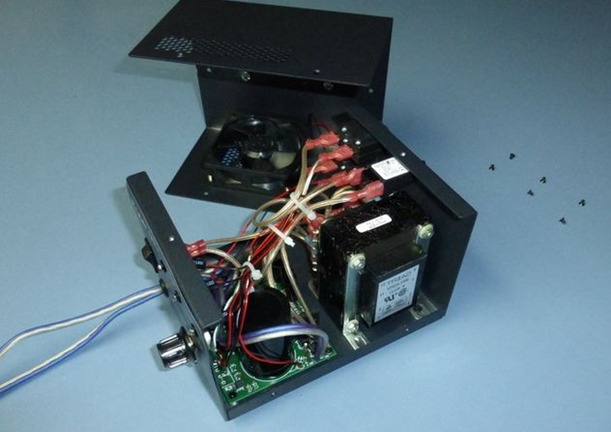 Why you can trust me.
The ReVolt3000 is no longer just a few prototypes. Over 100 units have been built and shipped all over the world. So you have no worries that the ReVolt3000 is just vaporware, it’s very real. 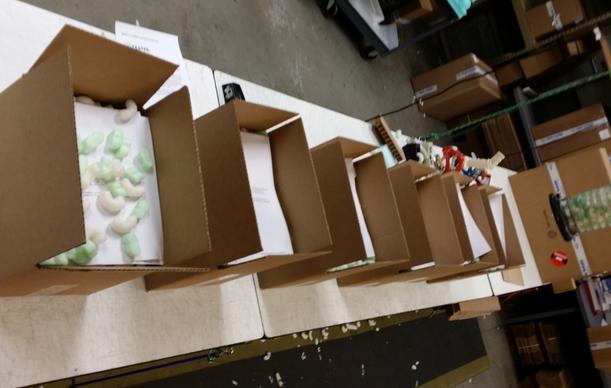 But, the ReVolt3000 is still very early in its infancy, which is why it needs your help and support. I have been a practicing Hardware and Software Engineering in a commercial and manufacturing environment for over 30 years.

I currently operate the engineering and production arm of successful computer hardware manufacturing company. I have owned and run companies for over two decades which have produced both hardware and software products from end to end. In practicing engineering of hardware and software solutions for decades, and being a serial entrepreneur, I’m thoroughly experienced in the necessities of a production project from all the technical aspects to the business and financial needs.

I’m very hands on at all levels when necessary as well as experienced and good at building creative, energetic, competent and cohesive teams. I pride myself on completing projects on time and within budget. I will be using most of the same techniques, networks, and shops I’ve come to know and trust over my many years developing numerous products. Most of these resources I have and use are right here in Reno, Nevada.

I am honest, hard working, dedicated and genuine. Although I can be quite a geek about things, integrity and customer service are my top priorities. Finally, I am no stranger to failure. I’ve always protected and honored my partners, shareholders and investors in bad times while following through with whatever needs to be done. You can rest assured that my progress updates will be regular and frequent, and any notifications of delays or other issues while be sent swiftly.

​And, if you took the time to read through all of this – WOW – thank you!

05-25-2014 – First batch of parts all unpacked, accounted for and sorted into production bins.  But some of the mess remains!

The ReVolt unit, will have Lead isolators for each lead set.

The ReVolt3000, Instructions, Leads and 12′ A/C Power cord will be placed inside a 6X6X10 box, packed tightly.

The 10X6X6 box will then be surrounded by about 1.5″ of foam peanuts and inside another carton of 12X9X8 dimensions.

Finally a warning sheet, which explains to carefully open then inner carton and not to let a knife penetrate much below the tape of the inner carton (or risk slicing a cable), and the top layer of packaging peanusts is laid in before the box is compressed and sealed.

07-22-2014 – New prototype sheet metal for international version.  Note additional voltage selector on back.  The production run will have the index 180 degrees from this prototype so that the selector switch is right-side up.  🙂

Note the additional hole on the front.  The 12 Volt ReCharge leads will not exit through the same hole as the revitalize leads will as was with Model 1Exp.

09-09-2014 – It’s been a bit but that doesn’t mean things haven’t been happening!  Posts did go out on KickStarter between then and now.  But here is a shot of the very first Model 1P built!  And, I’ve updated the manual to include the backside for setting the voltage. Unit should start shipping late this week and next.

Now for the next project 🙂  The world needs more ReVolts! 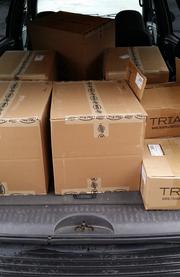 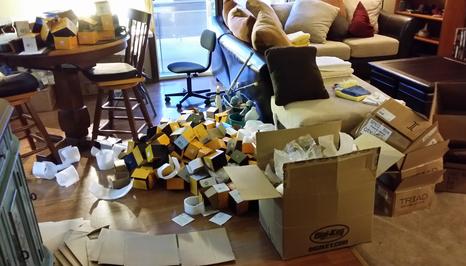 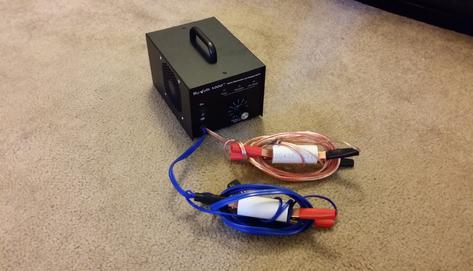 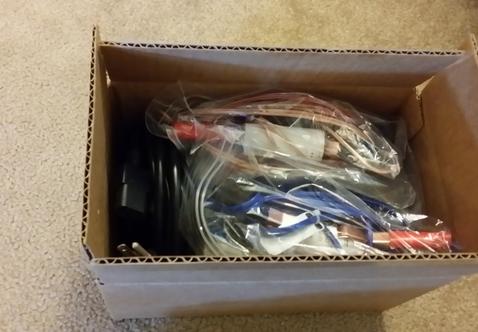 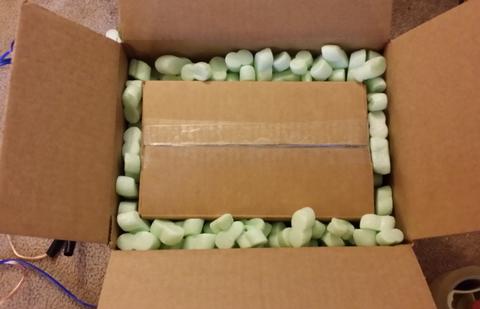 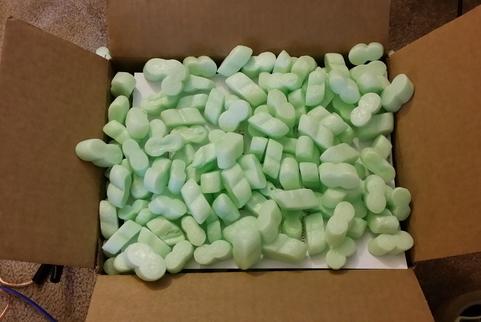 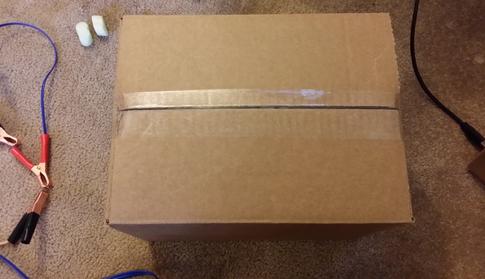 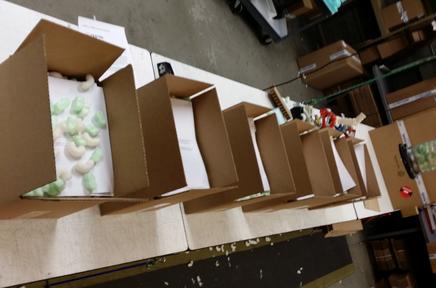 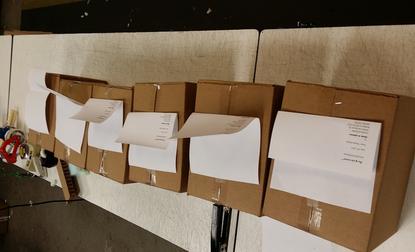 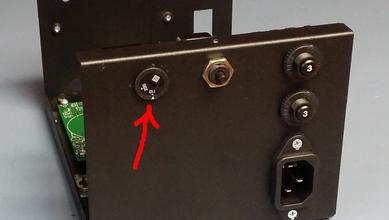 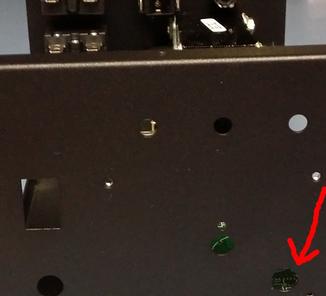 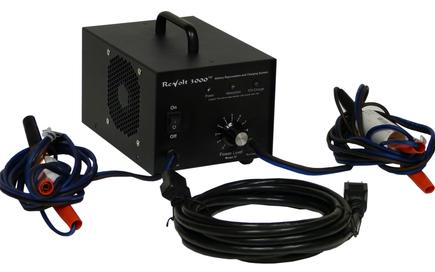